With the thin ¼” Plexiglas that was held in by the gasket, you had three different materials that had different expansion and contraction rates during temperature changes. The job of replacing the Plexiglas or the gasket was laborious and painful. With current technology we have cars and buildings that have windows held without fasteners, it seemed archaic replacing the gasket every few years, when I never have to do it for the car or house!

In architecture, glass display windows and shower stall enclosures are held in place with structural silicon. My dad’s Grampian 26 had plexiglas windows held in place with silicon, but also required Chicago screws to hold it in place during curing. Whether they were required after that I don’t know. It’s possible that in those days (late 70’s early 80’s) the silicon didn’t hold that well over time.

I wanted to have a screwless plexiglass window held only by silicon. I went with a DOW Corning product #795 in white. The new windows were spec.’d as 3/8″ thick smoked colour plexiglass with about an inch and a quarter (1-1/4″) overlap all around the opening. The silicone requires about 1/4″ gap to ensure that there is enough substance to hold (i.e. don’t squeeze the plexiglass to tightly to the fibreglass; you need a spacer). I used a trim piece to finish the fibreglass edge and to act as the silicone spacer.

First I drilled out the rivets from the existing aluminum frame. Then removed the four bolts. The exterior frame was siliconed to the gelcoat and I had to use a thin knife and flathead screwdriver to gently pry it free. When I
had, I realized why the windows were leaking, and even if I had replaced the gaskets it would have still leaked. Under the exterior frame I found discoloured sections where there was no silicone and where moisture had traveled through the rivet holes. The interior frame does not provide any structure support and is
only used to mask the rough fibreglass edge. This I removed as well. Using a scraper and acetone I carefully removed any remaining debris. 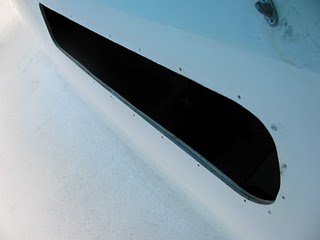 The boat had both an interior bulkhead liner and the exterior bulkhead. To ensure that I didn’t have any moisture leakage between the two layers of fibreglass I intended to glue both together with epoxy. However gravity made it difficult doing the upper edge. Since gravity also would affect any water, I decided to not worry about sealing above the port’s sides and only epoxied the bottom and both sides. I used the West System epoxy, because it works well, is easy to measure outwith it’s pre-portioned pump system, and because I already had it (from when I repaired a delaminating tiller).

After epoxing, it is important to clamp the glued edges. I used a 1×2 wood strips on both the interior and exterior faces and then several clamps to hold them together. I clamped from the centre outwards and that allowed the 1×2 to bend to the shape of the bulkhead. I left it to cure over night. The next day I removed the clamps and 1×2 wood strips, and filed or scrapped away any excess epoxy. 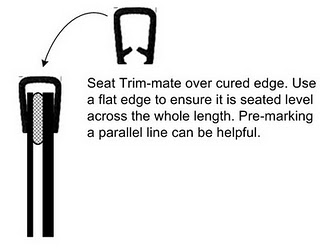 Next I dressed the fibreglass edge with a trim piece called Trim-Mate. I acquired this product from Holland Marine Products (HMP), but it may be available from other sources as well. I used the T4 version. Starting at the top centre of the port opening I pushed the trim piece over the edge until I had gone around the entire opening and finished at the top centre. I ensured that the round corners were adequately engaged with the trim, and when cutting the end, made sure there was minimum to no gap between ends of the trim. This left a clean opening. The interior had a clean finish and on the exterior, I now had a spacer to apply the plexi up against. 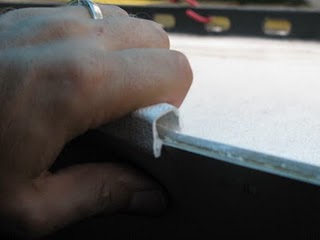 Trim-Mate Slips on and Covers the Rough Edges

I built braces to hold the plexiglas in place over the opening, while the silicone cured. The brace had a lower support for the bottom edge of the plexi and the hinged flat piece that I levered against the plexi to provide even pressure on the flat plexi face and screwed into place. The braces were anchored against the toe-rail and then tied down from the hand-rail above. I left most of the protective paper on the plexi, only removing about one and a half inches from the interior, where the silicone will need to hold on to it. This ensured that the remaining plexi was protected from any scrapes or scratches. 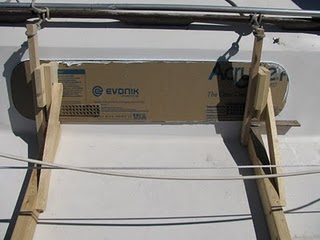 Bracing of Plexiglass Against Deck 1

Bracing of Plexiglass Against Deck 2

Bracing of Plexiglass Against Deck – Close Up 1

Bracing of Plexiglass Against Deck – Close Up 2

After “dry” fitting the plexi in the opening with the braces, and penciling the perimeter overlap of the plexi onto the exterior fibreglass, I taped off the immediate fibreglass deck to ensure that any excess silicone could be easily be cleaned up. I then applied the silicone to the exterior perimeter of the opening. I used as large a bead as possible, running it so that is was up against the outer perimeter of the trim and covered any existing screw openings. Then I carefully pressed the plexi into the silicone and bracing it with the braces. I did an initial clean up of any oozing silicone on both interior and exterior edges, and then left it for a day. On the interior there were some gaps between the trim and the plexi. In those areas I provided some additional silicone to close the gaps.
Next day I removed the braces and the surrounding tape, and cleaned any edges that I wasn’t able to reach the previous day. 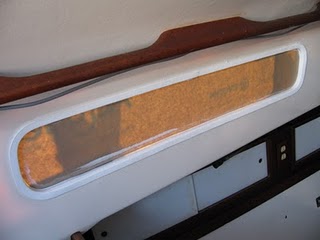 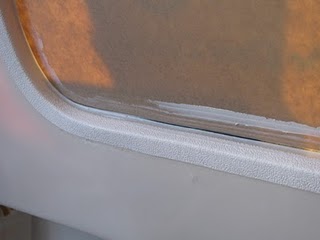